After enjoying such a big success at their first book signing at Borders bookstore in Santa Rosa on Tuesday December 9, 2008, store manager Patrick Carlson invited Michael and Jean-Marie back for another speaking and book signing event on Saturday February 7th, 2009.  Like December, this event was a huge success! 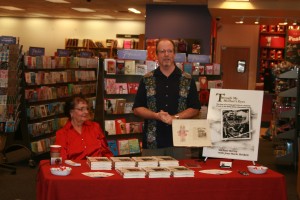 Michael and Jean-Marie speaking before the afternoon crowd at Borders bookstore. 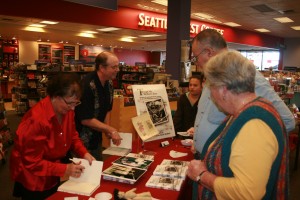 Jean-Marie and Michael signing books and meeting the audience members in person. 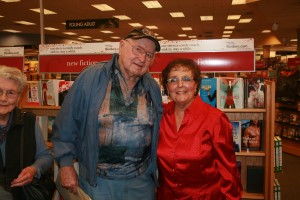 Jean-Marie with Leland Kolb, who was a First Lieutenant Marine Corp pilot during WWII.  Leland shared some pictures that afternoon with Jean-Marie and Michael that were taken inside the Santo Tomas Internment Camp after the liberation, plus some early pictures of his brother and him during and after the war.

Leland and his wife, Nell (far left, slightly off-camera) have been married 63 years; they met in Little Rock, Arkansas, when Leland came home after the war. Nell jokingly said, “He married me because I was the only one left.”